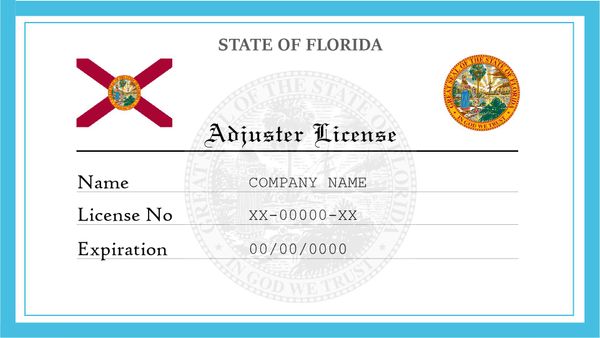 Adjuster analyzes the facts and risk circumstances of the insured event, draws up an expert opinion for the insurer based on the materials of the analysis, and carries out work in the field of risk management. In the event of major damage or a controversial issue that may be subject to legal proceedings, an independent expert is involved.

This Florida insurance license lookup is for any resident of Florida looking to be a staff or independent adjuster. What can you do with a 6-20 All-Lines adjuster license?

How do I get a 6-20 All-Lines Adjuster License?

How long is a Florida adjuster license good for?

Insurance licenses in Florida are perpetual and never expire. License holders must take continuing education classes every two years in order to keep their license current. The two-year period starts the year the initial insurance license was issued on the last day of the holder’s birth month.

There is no requirement to take another exam from the state, though you may take a short knowledge test at the end of the course to be sure that you understand important insurance concepts, laws, and regulations.

You will still need to pay the license renewal fee for non-resident licenses held in other states.

Who is exempt from licensure as an adjuster in Florida?

If you have taken a state-approved adjuster designation course and completed a pre-licensing course and pass the included exam. Then you are exempt from taking the Florida state adjuster exam.

How can an insurance agent lose their license?

A state’s insurance department will revoke an agent’s license if she willfully defrauds a policyholder, agent or insurance company.

What is a 520 adjusters license in Florida?

Find out how to conduct a 520 FL adjuster license lookup. A 5-20 Independent Adjuster license is an all-lines license, which allows its holder to handle auto, workers compensation, residential and commercial property, liability and casualty claims. A 5-20 independent adjuster can be self-employed or work for an independent company or another independent adjuster. His responsibility is to designate the amount of a claim, loss or damage that is due according to the insurance contract.

There are no classes required for the 5-20 license, although applicants can take a three-day insurance information course that prepares for the state exam. Applicants also can take a 40-hour Florida Certified Adjuster Designation course from one of the training companies.

The Florida 5-20 Independent Adjuster license has reciprocity in other states. It is identical to an all-lines license in Texas and gives its holder an advantage if he moves there or to one of the other neighboring states.

Legal residents of Florida, 18 years of age or older should complete an application and pay an appropriate fee. Applicants must be United States citizens or legal aliens with a work permit issued by the United States Citizenship and Immigration Services. Applicants will need to submit fingerprints. If an applicant holds an independent adjuster license in another state, he must provide a Letter of Clearance. If an applicant holds a General Lines Agent license, he does not need to take an exam. Florida has particular requirements for applicants with criminal histories. The license is valid for two years and must be renewed before it expires. There are no exam requirements for renewal.

Lily has six years of expertise as an SEO content writer. She has authored numerous articles for a variety of websites and businesses on various topics. She can help with ghostwriting, blog writing, guest posting, tech writing, etc. Lily writes SEO content for companies looking to improve their Google search rankings. She regularly writes articles about business licenses, digital marketing, cybersecurity, fashion, psychology, etc. Lily has established a unique writing style throughout the years of content writing for a variety of websites. She has also worked as an SEO specialist. Lily has achieved very high rankings for the websites with which she has collaborated. In her works, she employs a combination of various SEO and content tools, as she understands that well-optimized content is the KING.